You are here: Home / Blog / Spinal cord injury and the bowel

As it is Spinal Cord Injury Awareness Day, we thought we would highlight this infrequently talked about area, and the implications such injuries can have on the bowel.

Within the UK it is estimated that there are 400,000 people living with a spinal cord injury (SPI). With http://www.apparelyzed.com/reporting stating that on average one person is paralysed every 8 hours (~1,200 people every year). A SPI can occur at any point and to anyone, through accidents such as road traffic or sporting, or by gradual decline from illness. A number of issues can occur to these individuals, one of which is bowel dysfunction. And with very few SPI patients actually fully recovering (1%), this can result in lifelong issues.

Bowel function is maintained by the nerves entering the spinal cord. It is the nerves which enter at the lower part of the spine which are responsible for the voluntary communication of the bowel. The messages which are communicated between the bowel, spinal cord and brain control the muscles in the bowel and lower down in the rectum. Following a SPI, damage to the spinal cord may result in the loss of the ability to control the bowel reflex. Any SPI will therefore normally have an impact on defecation.

There are a number of complications which can occur in the bowel following injury:

(The below had been taken from http://www.apparelyzed.com/bowel-complications.html)

Autonomic Dysreflexia, sometimes called hyperreflexia, can occur in those with a spinal cord injury at or above the T6 level. Autonomic Dysreflexia occurs when there is an irritation, pain, or stimulus to the nervous system below the level of injury. The irritated area sends a signal to the brain but it is not able to reach the brain. A reflex action takes place, tightening blood vessels, causing the blood pressure to rise. If the high blood pressure is not controlled it may cause a stroke, seizure, or death.

Common Signs or Symptoms of Autonomic Dysreflexia are:

Check Bowel to see if there is sign of constipation or impaction? This can stretch the bowel. Is there stool in the rectum? Apply numbing medication (xylocaine jelly) and wait 5 minutes. Remove stool gently. Keep stool as soft as possible.

Laxatives should only be used as a last resort, as they will most probably cause bowel accidents, especially in those with flaccid bowels.

A faecal impaction is a large mass of dry, hard stool that develops in the rectum due to chronic constipation. This mass may be so hard that it cannot come out of the body. Watery stool from higher in the bowel may move around the mass and leak out, causing soiling.

To remove the stool, a gloved, lubricated finger should be used to gently remove the impacted stool from the rectum. If unsuccessful, a doctor should be contacted.

Haemorrhoids are veins in your rectum and anus that become enlarged (swollen). This can be caused by hard, constipated stools, and straining or pressure when having bowel movements. To prevent haemorrhoids, drink plenty of fluids and stay active. Sitting on a gel or air cushion can keep your haemorrhoids from getting larger and also can help prevent bed sores. Tell caregivers about your haemorrhoids. They may order medicines or suggest other ways to treat them.

Blood in your stools can be caused by several things. Doing digital stimulation too roughly can injure your rectum and cause bleeding. Make sure you perform digital stimulation carefully and use enough lubricating jelly. Make sure your fingernails are short. Haemorrhoids may bleed when stools move past them. Use more lubricating jelly if your haemorrhoids are swollen. Avoid straining when having bowel movements. Using stool softener medicine, drinking enough water, and eating a high-fiber diet can help prevent rectal bleeding.

For further information please visit (where extracts for this article were taken from): 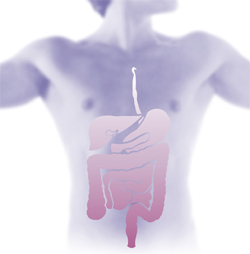