Hay fever affects around 25% of the UK population and the Brits spend more than £80 million a year on pills, sprays and eye drops to ward off the symptoms – the main cause being grass pollen. Hay fever is an allergic reaction to the grass pollen and the immune system responds by producing excessive amounts of an antibody (IgE), which in turn stimulates the release of histamine to flush out the spores. This irritates the airways making them swell and produces the symptoms of hay fever.

Some of you may remember the headlines below; 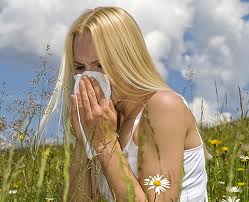 About 60-70% of the immune system lies within the gut so it was proposed that by drinking a daily probiotic, the symptoms of hay fever may be alleviated.

A five-month pilot study published in the summer of 2008 looked at twenty volunteers, where half was given a probiotic and the other half given a placebo, blood samples were taken before, during and after grass pollen seasons. There were lower levels of IgE in the probiotic group compared to the placebo group during and after grass pollen seasons. So in the summer of last year, researchers were looking to recruit a higher number of volunteers to further the study – keep an eye on this space!