You are here: Home / Blog / BRITS EMBRACE MULTI-TASKING ON THE TOILET

The art of multi-tasking has even extended to toilet habits, according to new research released today.

Texting, blogging and surfing the internet are just some of the activities that over 75% of Brits get up to whilst on the toilet.  The appeal of the digital space means 34% have sent a text message on the toilet, 33% have conducted a telephone conversation and 7% have searched the internet or bought goods online.   The advent of Twitter has even impacted on toilet habits, with 1% admitting to ‘Tweeting’ on the loo.

And ensuring no time is wasted, Brits are using their toilet time to plan tasks such as what to have for their next meal (14%), whilst 6% can’t wait for meal times and actually tuck into food and drink whilst on the toilet.

The survey of over 2,000 people was conducted by Yakult to mark the launch of the 11th annual Gut Week (24 – 30 August), which aims to raise awareness of gut disorders and the importance of good digestive health.

The research also revealed that men are more likely to look for a distraction when on the toilet than women.  14% of men polled said they relive their football team’s success by reading souvenir match programmes on the toilet.  18% of men also used their time in the toilet to complete a crossword or Sudoku puzzle. 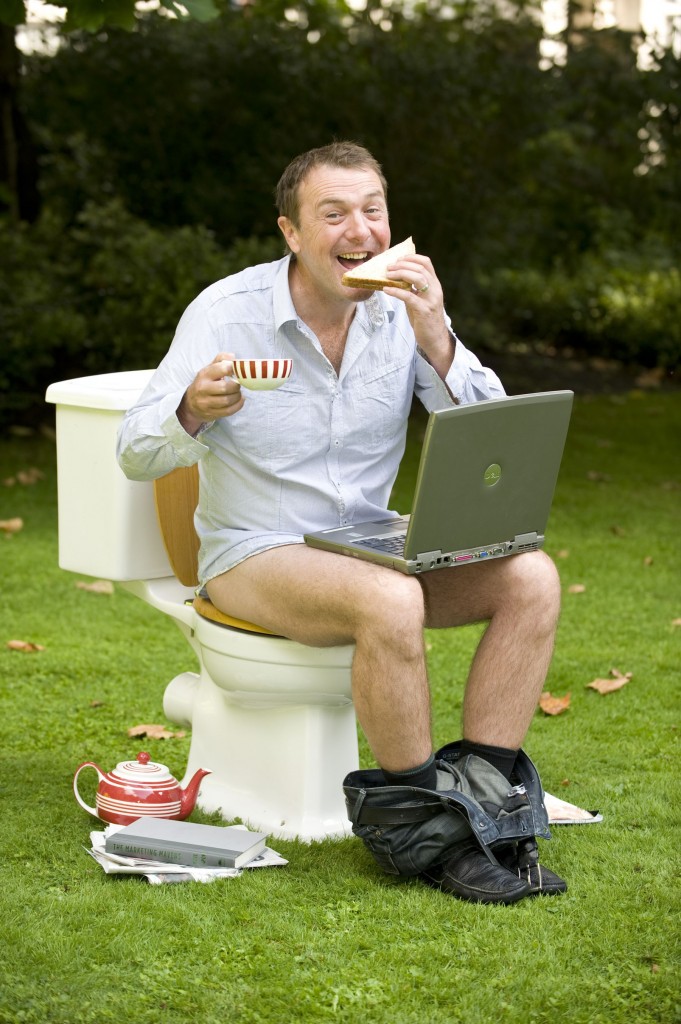 Phil Tufnell, launching Gut Week, said: “It’s not really cricket is it choosing to eat, drink, blog and chat whilst on the loo? Touring the sub-continent we tended to spend a lot of time on the toilet through no fault of our own and in these circumstances the odd toilet read was understandable. However, looking at what Brits get up to on the toilet makes you think that something isn’t quite right as we are spending too long doing our business.”

Christine Norton, Burdett Professor of Gastrointestinal Nursing, commented:”Some people do occupy their time on the toilet for all sorts of reasons.  In the past this was with a newspaper, magazine or book, but now involves using a wireless device to access the internet or answer emails.   Generally this is harmless, but there are a few health risks worth being aware of”.

“There are problems which can worsen from spending too long on the toilet, such as haemorrhoids, bleeding and problems with emptying the rectum.  More importantly, eating on the toilet runs the risk of contaminating the food with bacteria from the toilet.  This may cause a bacterial gastroenteritis, which is an infectious diarrhoea and can be very severe.”