You are here: Home / Blog / The ‘Gutless Kayaker’ 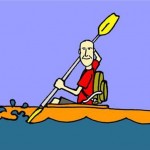 This week we wanted to draw your attention to a world record currently being broken, let us introduce you to the ‘Gutless Kayaker’ – Justin.

Between the end of 2001 and 2009 Justin went from being fit and healthy to needing total parenteral nutrition to survive. After being admitted to hospital in 2003 (after a long period of unexplained illness e.g. infected nail beds, excessive mouth ulcers etc.) he was diagnosed with Crohn’s disease and investigations revealed his large intestine needed to be removed.  Due to further complications, Justin had most of his small bowel removed by 2006 and had a stroke (caused by a heart infection) resulting in open heart surgery in 2009.

Amazingly by the end of 2010 Justin had raised over £20,000 (for research) by setting a new world record for an endurance trip surviving on artificial nutrition. This involved kayaking 238 miles through English canals from Manchester to London, whilst connected to a life support system for 24 hours a day.

Justin’s challenge for 2013 is to exceed his current world record by kayaking 420 miles from Skipton (North Yorkshire, UK) to Bristol.

Justin and his team have so far completed 14 days for the endurance trip; he is set to break his own world record in Bristol on the 8th October 2013. The aim of this challenge is for the ‘gutless Kayaker’ team to raise over £50,000 for St Marks Hospital Charity Foundation, to help fund further research into conditions similar to Justin’s.

To find out more about Justin’s story, follow the ‘Gutless Kayakers’ progress and meet the rest of his team check out http://www.gutlesskayaking.com/