You are here: Home / Blog / Pumpkins – not just for Hallowe’en! 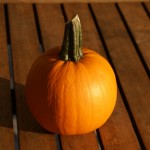 Hallowe’en is believed to have originated in Ireland as the pagan harvest festival. It is widely celebrated in much of the western world on the 31st October; including Canada, America, New Zealand, Australia and of course the UK.

Many people celebrate Hallowe’en with a pumpkin lantern, which is often carved into a variety of faces. But once the pumpkin is carved, what do we do with the pumpkin flesh and seeds? Well, don’t discard them – they are delicious, and great for health too!

Pumpkin is a rich source of beta-carotene, which the body can use to make vitamin A. It also contains calcium, iron, folate and vitamin C. Pumpkin is naturally low in salt and fat and can help you towards reaching your 5-a-day fruit & veg target.

Pumpkin can be used in a lot of savoury and sweet dishes so why not have a look for some recipes and get experimenting? And if you’re peckish for a Hallowe’en snack, nibble on some pumpkin seeds – they contain zinc and iron, so they’re a better choice than chocolate or crisps!