You are here: Home / Blog / Bacteria and the large intestine 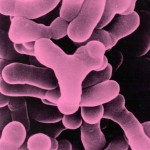 While every part of the digestive system has its own role in food processing, the large intestine (sometimes called the colon) is particularly interesting, because it is home to a vast population of bacteria. This busy little internal ecosystem is crucial for our health.

We need bacteria. While previous generations used to think that all bugs and microbes were dangerous, nowadays we know that good bowel function – and indeed life itself – actually depends upon a healthy balance between the useful and the less useful types of bacteria.

The healthy human body is home to some 100 trillion bacteria. They are on the surface of the skin, inside the mouth, nose and uro-genitary tract, but most live in the large intestine. More than 1000 different types (known as species) live in your large intestine alone. Amongst all different species, many are helpful, but some could pose a threat to health if their numbers get out of hand. It’s that balance that’s important.

What do beneficial bacteria in the gut actually do?

• Neutralise some of the harmful by-products of food breakdown.

• Aid the absorption of nutrients.

• Make life uncomfortable for harmful bacteria by competing for food and controlling levels of oxygen and acidity in the gut so that the living conditions favour beneficial species.

• Because the majority of the immune system is located in your gut, beneficial bacteria also help support the body’s natural defences.

When in balance, the useful types of bacteria are able to exert a positive influence on health. But an unfavourable balance of gut bacteria can cause problems, most obviously tummy troubles. Diarrhoea, for example, may occur if anything disrupts your gut bacteria. And if certain types of unhelpful bacteria get the upper hand, you could join the estimated 5.5 million UK people each year who suffer a bout of food poisoning. Causes of such disruptions include stress, alcohol, holidays, poor diet and taking antibiotics (which kill good bacteria as well as bad ones so can seriously disrupt your balance).

• There are more bacteria in your large intestine than there are humans on this planet.

• The only time anyone’s gut is ever completely free from bacteria is during the nine months spent inside their mother’s womb. A baby meets its first microorganisms in the birth canal. From there a lifelong relationship with bacteria begins.

• Although up to 1,000 different species of bacteria may live in the gut, 99% of the microbes probably come from just 30 to 40 key species.

• Every individual bowel has a different mix of bacteria types in their gut but, for any one person, their own pattern tends to stay pretty constant through life.

• Bacteria in the first, or ascending, part of the colon are experts in breaking down carbohydrates (sugars and starches). They do this by fermentation, whose byproduct is the gases that exit the back passage as wind.