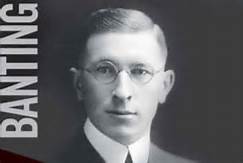 Nobel prize-winner Frederick Banting was born today in 1891. Together with John McLeod, Charles Best and Bertram Collip he discovered insulin – one of the biggest medical discoveries of the 20th Century.

The men chose to make insulin available to diabetes patients without charge which led to insulin therapy and production spreading across the world.  Their discovery has saved the lives of millions of people and allows diabetics today to lead a relatively normal life.

In honour of Banting’s birthday, World Diabetes Day was created in 1991 by the International Diabetes Federation (IDF) and the World Health Organisation (WHO) in response to growing concerns about the escalating health threat posed by diabetes.

Since then World Diabetes Day has been celebrated annually on 14 November.

The theme of World Diabetes Day, from 2014 to 2016 is ‘Healthy living and diabetes’, this year the focus is: ‘starting each day right with a healthy breakfast’.

If you have diabetes or you know someone who is diabetic take some time today to look at/tell them about some healthy options for your/their breakfast: http://bit.ly/1QuMQWx  http://bit.ly/1kMHHwH

For further information about: