You are here: Home / Roasted parsnips with lentils, zhoug and spiced prunes

To finish – herbs such as micro parsley or purple sorrel 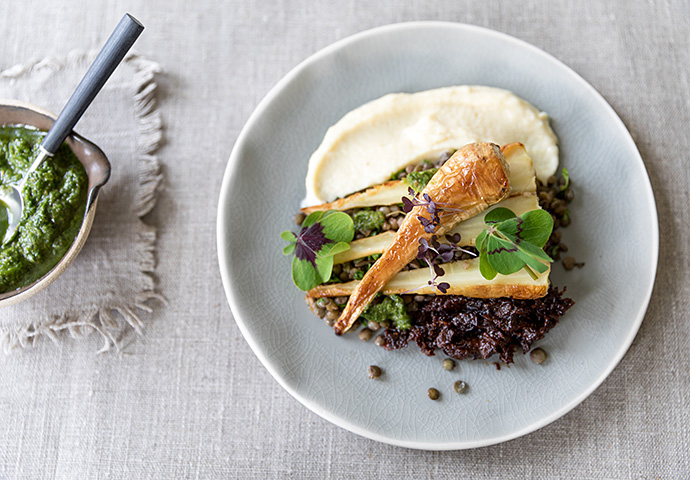 This dish contains a panoply of wintery Christmas flavours and aromas including earthy notes from parsnips and thyme; exotic spices from the spiced prunes and the scent of zingy herbs contained in the Israeli zhoug dressing. This vegan dish has so many ingredients that help to promote a healthy gut health including dietary fibre contained in the vegetables and galacto-oligosaccharides (which gut bacteria love) in the lentils.

Prunes are also useful for people who suffer from constipation as they contain both soluble and insoluble dietary fibre and a natural laxative called sorbitol. Sorbitol draws water into the gastrointestinal tract which promotes bowel movements.

Remove from the oven and blend the roughly chopped parsnips with your choice of nut/plant milk alternative to form a thick purée. Season with salt and pepper. Set aside in a warm place. Leave the other tray of parsnips as long sticks.

Meanwhile put the lentils in a pan with a litre of water, the bay leaves, garlic and thyme. Bring to the boil, reduce the heat and simmer the lentils for 15 minutes or until tender.  Drain and discard the herbs and garlic. Mix through the olive oil and parsley and season to taste.

Put the prunes, spices and water into the goblet of a blender and pulse to create a chunky paste. Season to taste with salt.

To make the Zhoug. Put all the ingredients into a blender. Blitz briefly for a few seconds to keep the dressing quite rough.

To serve the dish share the parsnip purée between four dishes. Add the lentils and prunes and then top with the roasted parsnip sticks. Drizzle with the zhoug and finish with the micro herbs.

Cooks tip
You can use a sachet of ready cooked Puy lentils to save time. This dish would also be delicious served with a light vinaigrette dressing containing chopped herbs such as parsley and dill.

Variation
Jerusalem artichokes or sweet potato can be used instead of parsnips in this recipe.