You are here: Home / French toast with wild mushrooms spinach and sweet tomatoes 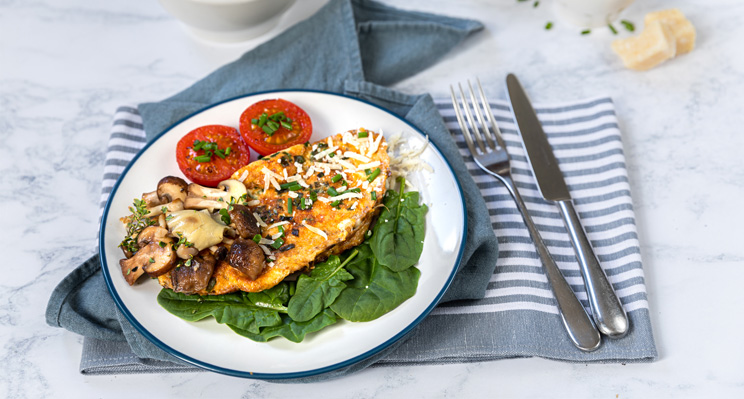 This is a savoury version of French toast with added herbs and vegetables.  Slices of wholegrain bread are dipped in beaten egg, mixed with chopped chives, and cooked in a hot pan with a smear of olive oil. While the French toast is cooking it is given a dusting of grated Parmesan cheese which delivers a delicious savoury crunch to the finished dish.

Whisk together the eggs and milk and stir in the chopped chives. Pour the mixture into a shallow dish for dipping the bread.

Drizzle a little olive oil over a non-stick pan and heat gently.

Using tongs, dip a slice of bread into the egg mixture, flipping it over so both sides are soaked. Pick up the bread with the tongs, place it into the frying pan and cook for 3 minutes each side, until the surface is golden brown. While the bread is cooking, sprinkle a little Parmesan cheese over the bread to get an extra crisp, cheesy surface.

When one piece of French toast is cooked, place it on a baking tray to keep in the oven while the other pieces of toast are cooking.

Cook the remaining slices of bread in the egg mixture as above and keep warm in the oven until ready to serve.

Take a second non-stick pan and add another drizzle of olive oil. Add the sliced tomato halves face down to one side of the pan and mushrooms to the other. Strip the leaves from the thyme, chop finely, and scatter over the mushrooms. Stir the mushrooms gently in the pan for 5 minutes until soft. Cook tomatoes until the cut surfaces are just beginning to brown.

Serve the French toast with the wild mushrooms, tomatoes, and baby spinach leaves.