You are here: Home / Brussels sprout, chestnut and sage risotto 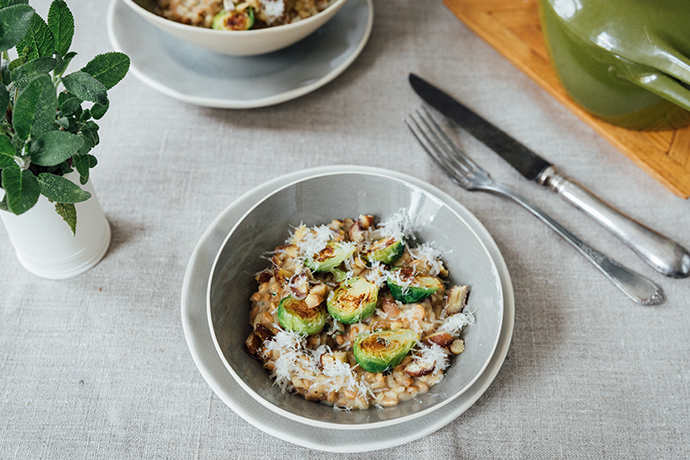 A risotto is a great meal to serve as a vegetarian or vegan option at Christmas. Brussels sprouts and chestnuts are easily available over the winter months in most supermarkets.

Some of the rice in this risotto has been replaced with pearled spelt, a wholegrain with a highly prized nutty flavour. It contains dietary fibre which is good for gut health.

Chestnuts contain dietary fibre and polyphenols which are known to support the health of the gut microbiome.

Brussels sprouts belong to the family of cruciferous vegetables. Cruciferous vegetables contain a sulphur-containing phytochemical called glucosinolate, which is responsible for the distinctive smell and bitter flavour. Cooking and digestion break down glucosinolates into compounds called isothiocyanates that have been researched for their anti-cancer effects.

Put 100g of the cooked chestnuts in a saucepan with milk and bring to a simmer for 3 minutes. Remove from the heat and allow to cool a little before blending in a liquidiser to make a smooth chestnut purée. Set aside for later.

Heat one tablespoon of oil in a large saucepan, add the onion and cook gently for a few minutes until the onion has softened but not coloured.

Add the rice and pearled spelt to the saucepan and stir for a few minutes until the grains become coated in a little oil from the pan. Add the wine, if using, and continue to cook until it has evaporated.

Begin adding the stock to the rice and spelt mixture, a ladleful at a time. (Reserve 50 ml of stock to cook the sprouts a little later). Continue to stir the risotto until all the stock is added and the rice and spelt grains are firm but not chalky when bitten into. This will take about 15 minutes. The spelt remains slightly chewy when cooked.

Add the chestnut purée, half the cheese and half of the chopped sage leaves to the rice and spelt mixture and stir well. Add a little more stock to the risotto if required. It should be creamy and not too dry. Taste the risotto and adjust the seasoning if required.

To get ahead with this recipe prep up the ingredients in advance. Begin cooking the dish and stop half way through adding the stock to the rice and spelt before they are fully cooked. At this point turn off the heat. Brown the Brussels sprout halves and set on one side.

Twenty minutes before you are scheduled to eat, warm the remaining stock and continue to cook the risotto.